Fleming Fire Department #1
HomeAbout UsAmanda’s LawApparatusApplicationBurn BanCOVID-19 Booster ShotCOVID-19 InfoCall HistoryCall VolumeContact UsFire NewsFire PreventionFleming Ambulance 1 Inc.GuestbookJournalKidde Rapid EntryMapMembersMental Health ResourcesNWS BinghamtonNewsPicturesPreplan BusinessPreplan Form ResidentialProject LifesaverQueen of HeartsRecruitNYRecruitmentSize Up MediaThe FallenYellow Dot ProgramYouth Firesetting
Recent calls
06:54 Breathing Problem
Fleming Ambulance responded to a residence on White Road for a elderly female difficulty breathing.
13:01 Hazard Fire
Fleming Fire was dispatched in the area of West Lake Road and Wyckoff Road for trees down across the roadway making the road impassible.
10:14 Sick Person
Fleming Ambulance responded to a residence on Route 34 for a female not feeling well.
13:57 Breathing Problem (Mutual Aid) City of Auburn
Fleming Ambulance responded mutual aid to the City of Auburn to a residence on Wall Street for a female outside experiencing difficulty breathing.
News headlines
Work set to begin on Thruway improvements in Ontario, Seneca and Cayuga Co.
Work is set to begin on a $15.5 million improvement project on 16 miles of the NY State Thruway in Ontario, Seneca, and Cayuga Counties.Roadway and safety improvements for 16 miles of Thruway in Finge...
➠
Grab the fleece/hoodie this afternoon
SYRACUSE, NY (WSYR-TV) – It is back to sweatshirt and fleece jacket weather today. A gusty breeze will add a chill to the air too.THIS AFTERNOON:Much of the day looks to be dry but come the late...
➠
The storms are here; some damage reported
SYRACUSE, N.Y. (WSYR-TV) — An approaching cold front from the west will bring thunderstorms, with the potential for strong and damaging winds.A Severe Thunderstorm Watch is in effect for all of ...
➠
Cayuga County Sheriff Brian Schenck on Mental Health Awareness Month
In this episode, the Sheriff and I discuss Mental Health Awareness Month and the training his deputies receive in de-escalating mental health situations through the department’s mobile crisis te...
➠
News
Lighter snow and sleet from Monday’s storm

SYRACUSE, NY (WSYR-TV) – Winter storm warning remains in effect for Central New York into Monday night for the combination of snow and ice.

The more westerly track of this storm means CNY is seeing a mix bag of snow, sleet, and freezing rain because of a nose warmer air in the upper levels of the atmosphere.

A brief lull in the precipitation Monday morning

Monday morning’s commute is a slow and slippery one. Plan to add more time, even possibly doubling your normal commute time to be safe.

After sunrise, we are done with the first part of our storm with temperatures in the low 30s which will help the road crews, especially near and east of I-81.

The next wave of widespread snow moves in CNY as the storm moves into New England.

Another 1 to 3 inches of snow is likely for many between about noon and 7 p.m. Monday. Winds will also crank up during the afternoon from the west-northwest as the storm starts to pull away with some blowing and drifting snow kicking up too.

The Monday evening commute may be a slow go too, especially if we get a burst of snowfall from Lake Ontario. Eventually, we do transition to more localized lake effect snow Monday night.

Snowstorm totals, by 7 p.m. Monday will be close to a foot in some areas north and west of Syracuse.

Northwest winds will be gusting to 30-40 mph Monday night. This will produce some lake snow southeast of Lake Ontario, including the Syracuse area. Another 2 to 6 inches of additional snow is possible during this time.

Outside of the snow, we have colder air coming in. Although thankfully not as cold as this past weekend, temperatures will fall into the teens overnight with wind chills at or below zero.

Lake effect snow is expected to linger at least through lunchtime with another coating to an inch or two possible southeast of Lake Ontario, especially in the hills south of Syracuse.

It’s a brisk and cold day too with highs only reaching up to around 20, but wind chills likely starting at or below zero (-10 to 0)!

We should also see some sun develop Tuesday, especially for the afternoon as the air turns drier with high pressure building in during the day. 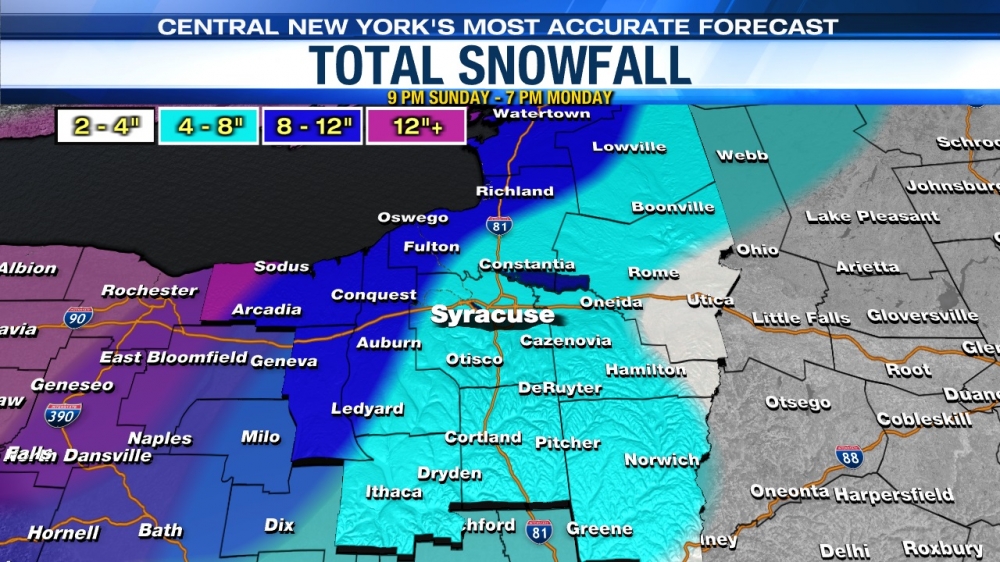 ×
1 of 202 of 203 of 204 of 205 of 206 of 207 of 208 of 209 of 2010 of 2011 of 2012 of 2013 of 2014 of 2015 of 2016 of 2017 of 2018 of 2019 of 2020 of 20
400 entries in the News
Work set to begin on Thruway improvements in Ontario, Seneca and Cayuga Co.
Work is set to begin on a $15.5 million improvement project on 16 miles of the NY State Thruway in Ontario, Seneca, and Cayuga Counties.Roadway and safety improvements for 16 miles of Thruway in Finger LakesThe Citizen reports seven miles of the Thruway roughly between Exits 41 and 42 will be milled...
➠
Grab the fleece/hoodie this afternoon
SYRACUSE, NY (WSYR-TV) – It is back to sweatshirt and fleece jacket weather today. A gusty breeze will add a chill to the air too.THIS AFTERNOON:Much of the day looks to be dry but come the late morning and afternoon there could be a passing shower or two, especially north of Syracuse.
➠
The storms are here; some damage reported
SYRACUSE, N.Y. (WSYR-TV) — An approaching cold front from the west will bring thunderstorms, with the potential for strong and damaging winds.A Severe Thunderstorm Watch is in effect for all of Central New York through 4 p.m.
➠
Cayuga County Sheriff Brian Schenck on Mental Health Awareness Month
In this episode, the Sheriff and I discuss Mental Health Awareness Month and the training his deputies receive in de-escalating mental health situations through the department’s mobile crisis team.Mental Health and Motorcycle Safety AwarenessMay is also Motorcycle Safety Awareness Month.
➠
Wildfire smoke creates a hazy CNY sky
SYRACUSE, NY (WSYR-TV) – Have you noticed a slight milky white haze to our sky lately?The sunrise Thursday had an orangish tint to it in Central New York.Get the latest Storm Team forecastIf you live in Oswego County or farther west towards Buffalo you have probably noticed it more.Here’...
➠
One hospitalized after van pulls in front of sedan at 414/Thruway intersect
The Seneca County Sheriff’s Office provided an update on the crash that happened at the intersection of State Route 414 and the New York State Thruway on-ramp in the town of Tyre.On Saturday around 9:45 p.m.
➠
5&20 temporarily shut down after RV crashes through utility pole, hitting t
Firefighters were called to a familiar address on Sunday for the report of a car into a pole.The call came in to 911 around 5:30 p.m. on April 24, according to the Waterloo Fire Department.Upon arrival they found a Class C motorhome that struck a utility pole, two cars, a few street signs, and a lil...
➠
More than a half-dozen departments called to building fire in Weedsport
Firefighters from several departments were on-scene of a structure fire in Weedsport.News of the fire broke a little after 5 a.m., when transportation officials shut down Route 34 in the area.According to our partners at the Cayuga-Seneca Fire Wire, Weedsport, Port Byron, Jordan, Sennett, Owasco, Au...
➠
Everything you need to stay safe during spring thunderstorms
Best products for spring thunderstormsAlthough spring is synonymous with sunshine, buds and blossoms, it can also bring harsh weather. Spring thunderstorms can cause serious issues, especially when they arrive with strong winds and rain that may lead to flooding.
➠
Old Man Winter has another trick up his sleeve for CNY 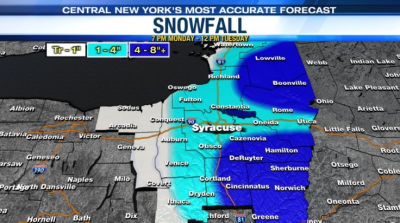 SYRACUSE, NY (WSYR-TV) – A sunny, frosty start to Monday gives way to clouds during the afternoon which leads to more wintry weather Monday night?! Details below…OVERNIGHT:High pressure in charge overnight providing the region with a clear sky, light winds and a frosty chill.
➠
20-year-old dies in fatal car crash in Canton Sunday morning
CANTON, N.Y. (WWTI) — New York State Police are investigating a fatal crash that occurred in Canton on Sunday.According to a press release from NYSP, around 8 a.m. on April 17 officers responded to a one-vehicle crash on Irish Settlement Road in the town of Canton.
➠
5 people taken to hospital after rollover crash in LaFayette 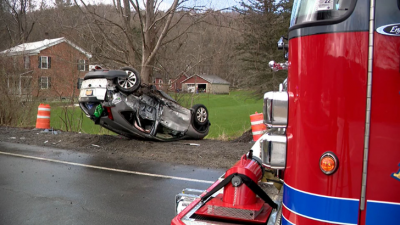 Lafayette, NY — 5 people were taken to the hospital after a rollover car crash LaFayette around 10:30 a.m. on April 17th.The two-car crash happened near the intersection of Route 20 and Apulia Road.One of the vehicles ended up rolling over.
➠
Even warmer today along with t-storm threat
SYRACUSE, NY (WSYR-TV) – Even warmer air with some higher humidity builds in Wednesday with scattered showers and storms.TODAY:A warm front slowly slides north through much of the region Wednesday.
➠
County Health Official emphasizes the importance of personal protection and
County Health Official Emphasizes the Importance of Personal Protection and Vaccinations as COVID Cases rise again in the Region “Cases of COVID-19 are increasing locally in and around Wayne County”, said Wayne County Public Health Director, Diane Devlin, RN, BSN, MS this morning.
➠
Waterloo man causes two car crash fleeing deputies, faces larceny and assau
One person was taken into custody and another hospitalized after an alleged theft, search, and two-vehicle crash in Ontario County.According to a news release, the Ontario County 911 Center received a call from a citizen that two males stole two televisions at the Geneva Walmart.The citizen followed...
➠
Woman, child inside Syracuse home when large fire broke out overnight escap 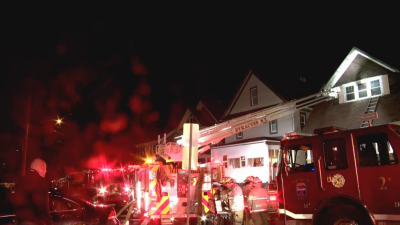 SYRACUSE, N.Y. — Two occupants, a woman and child, who were inside a home on Burdick Avenue in Syracuse when a fire broke out early Friday morning were not injured, the fire department says. Both were transported for evaluation but are believed to be okay.The fire broke out shortly before 5:00...
➠
Firefighters able to save home from becoming total loss after Macedon blaze 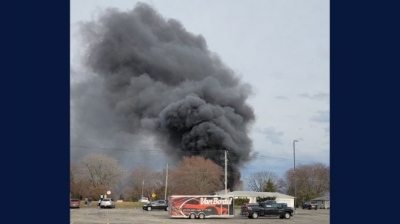 Deputies from the Wayne County Sheriff’s Office provided an update on the structure fire that prompted a heavy response from multiple departments in Macedon on Thursday.Around 5:48 p.m. first responders were called to a structure fire on Westview Circle.According to a news release, a neighbor ...
➠
Cayuga, Steuben, Yates counties among areas eligible for $4.4M in hazard
Cayuga, Steuben, and Yates counties are among the areas eligible for nearly $4.4 million in federal hazard mitigation funding, announced New York State Governor Kathy Hochul on Friday, March 25.The funding is available to local governments and select non-profits in nine New York counties affected by...
➠
State officials raise concerns about impact of Conquest solar farm project
Scientists with the state Department of Environmental Conservation (DEC) and state Department of Agriculture and Markets have submitted testimony that identifies potential problems with the solar farm proposed for Cayuga County.The testimony was submitted to the state Board on Electric Generation Si...
➠
Early morning crash shuts down portion of I-81, I-481 interchange
SYRACUSE, N.Y. — Emergency crews responded early Monday morning to a crash involving a tractor-trailer on I-81 northbound near the I-481 interchange south of the City of Syracuse.The crash prompted all lanes of I-81 northbound to be shut down temporarily while emergency crews worked to clear t...
➠
1 of 202 of 203 of 204 of 205 of 206 of 207 of 208 of 209 of 2010 of 2011 of 2012 of 2013 of 2014 of 2015 of 2016 of 2017 of 2018 of 2019 of 2020 of 20
400 entries in the News
Call volume
2022 total
In Town Calls
81
Mutual Aid
63
Total
144
Executive Board 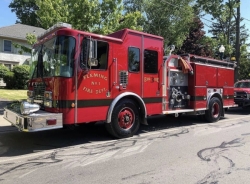 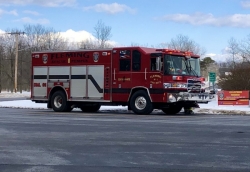 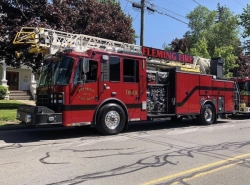 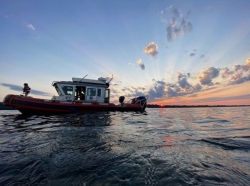 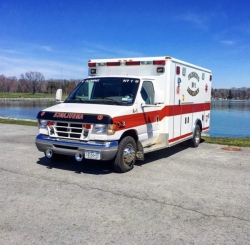 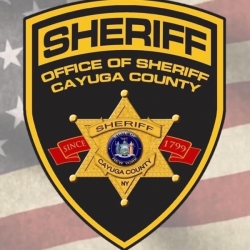 This site has been viewed 13,237 times.
Calls
News
Pictures
Apparatus
Maintained by the members and staff of Fleming Fire Department #1. Designated trademarks and brands are the property of their respective owners. Copyright © 2006-2022. YourFirstDue Inc. All Rights Reserved. Content on this web site is supplied by Fleming Fire Department #1. YourFirstDue Inc. cannot be held responsible or liable for any content, text, pictures, or any other media found on this web site.
Management login
Powered by